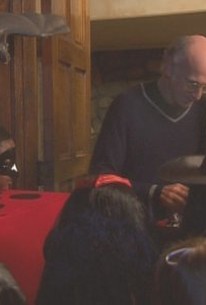 Larry (Larry David) and Cheryl (Cheryl Hines) meet their friends, Cliff Cobb (Christopher Thornton) and his wife, Shelley (Holly Wortell), for dinner. Cliff is a wheelchair-bound screenwriter, and his first film, "30 Below," is premiering later that night. Larry takes Shelley aside for a moment to ask about the bracelet she's making, which he's buying as a birthday surprise for Cheryl. At the restaurant, Larry orders a Cobb salad, and Cliff seems oddly upset when Larry asks the waiter to make changes to the traditional recipe. Asked to explain, Cliff says his grandfather invented the Cobb salad when he was working as a chef at the Drake Hotel in Chicago. Larry is somewhat dubious. Cliff and Cheryl are conversing intensely, and ignoring their spouses. Larry jokes to Shelley, "We could talk about anything. They don't care -- we should have sex sometime." Shelley responds, "Yes, we should." Outside the theater before the film starts, Larry starts humming a tune, and explains to Cheryl that it's a song Wagner composed for his wife. Another man waiting for the film (Zane Lasky) overhears Larry humming, and yells at Larry, pointing out that Wagner was "one of the great anti-Semites in history," and calling Larry a "self-loathing Jew." "I do hate myself, but it has nothing to do with being Jewish!" Larry shouts back. Larry has another confrontation on Halloween night, when two teenage girls show up trick-or-treating, and Larry points out that they're not wearing costumes, and doesn't give them any candy. The next morning, finding that the house has been vandalized, Larry tries to defend his actions to Cheryl. "They were just using Halloween to get candy!" he cries. 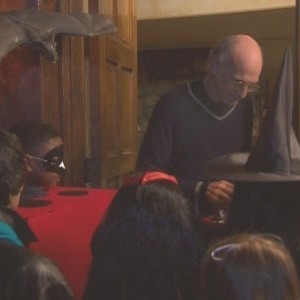