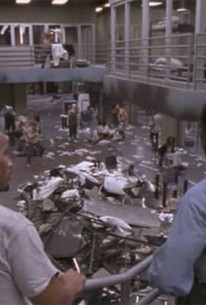 A Game of Checkers
Oz Season 1

Tensions at the Oswald State Penitentiary come to a head in the finale of Oz's first season. After being attacked by Beecher (Lee Tergesen), Schillinger (J.K. Simmons) returns to Em City, telling a skeptical McManus (Terry Kinney) that he's a changed man, and will not seek revenge. Schillinger (J.K. Simmons) is concerned about the well-being of his two teenage sons, and plans to behave himself so he'll have a shot at parole. Beecher provokes him, and lets him know he'll try to foul up his plans. McManus confronts Diane Wittlesey (Edie Falco) when he catches her smuggling cigarettes to Schillinger's pal, Scott Ross (Stephen Gevedon). She tells Ross that it's over, but he threatens to go to the warden if she stops supplying him. In the wake of Groves' (Sean Whitesell) murder of a guard, prisoners have been beaten without cause, and many guards have been suspended. Understaffed, the guards in Em City find themselves overpowered when a riot breaks out. Guards are beaten and taken hostage, as is Father Mukada (B.D. Wong). Dobbins (Zuill Bailey), the cellist, is brutally stabbed during the riot, and Hill (Harold Perrineau) persuades a remorseful Mayhew (Rick Fox) to bring the wounded man out of Em City. Said (Eamonn Walker), Alvarez (Kirk Acevedo), Ross, and Adebisi (Adewale Akinnouye-Agbaje) form a fragile alliance to control their respective groups, and come up with a list of demands. McManus tries to assuage his feelings of guilt by offering himself as a hostage in exchange for two wounded guards. Meanwhile, Glynn (Ernie Hudson) finds the prisoners' demands for the restoration of conjugal visits and smoking privileges quite reasonable, but Governor Devlin (Zeljko Ivanek) refuses to negotiate, and calls in the National Guard.

A Game of Checkers Photos 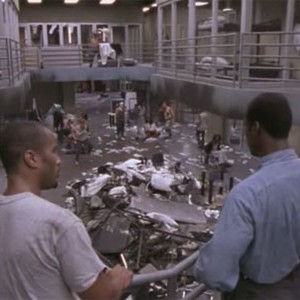