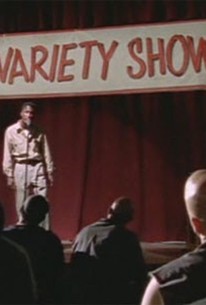 White (Michael Wright) is preparing to sing in the prison talent show, and gets so frazzled that he turns to Poet (MuMs) for advice. Poet offers heroin, and White considers the offer. Said (Eamonn Walker) gets out of the hole. He tells the other Muslims he's decided that White should be allowed to be who he is. Robson (R.E. Rodgers) reluctantly visits the dentist, Faraj (Aasif Mandvi), after years of neglecting his teeth. Faraj performs periodontal surgery, transplanting gum tissue from a cadaver, and taunting Robson about the tissue's origins. Alvarez (Kirk Acevedo) wants to give the guide dog he's training to Rivera (Nelson Vasquez), the guard he blinded. Sister Pete (Rita Moreno) tries to arrange it. A new prisoner, Father Meehan (Malachy McCourt), finds a hostile cellmate in O'Reily (Dean Winters). O'Reily makes a deal to kill Jia (Michael Delmare) in exchange for Morales (David Zayas) maiming Shupe (Joel West). Poet convinces Redding (Anthony Chisholm) that the Sicilians sold drugs to Hill, prompting Redding's retaliation. Father Mukada (B.D. Wong) gets Jaz Hoyt (Evan Seinfeld) to testify against Kirk (Sean Dugan), who retaliates against Mukada. Catherine McClain (Sandra Pupuro) decides not to represent Keller (Christopher Meloni), because she believes he's guilty, and breaks up with Beecher (Lee Tergesen). Guenzel (Mike Doyle) attacks Beecher, spurring him to make an ugly deal with Schillinger (J.K. Simmons). This episode revolves around the talent show theme, opening with Sister Pete singing a song. This is the only episode of the first five seasons of Oz which is not introduced by Hill (Harold Perrineau Jr.). Reportedly, Perrineau needed time off to shoot The Matrix Revisited, so his usual commentary was replaced with songs from Hoyt, Redding, Mukada, and a duet between Beecher and Schillinger. The episode was directed by actor Roger Rees. 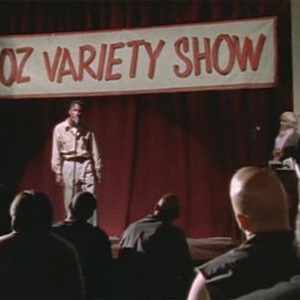