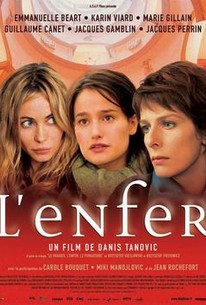 Director Danis Tanovic picks up where the late-Krzysztof Kieslowski left off by taking on the second installment of Kieslowski's "Heaven," "Hell," and "Purgatory" trilogy (the first was adapted by Run Lola Run director Tom Tykwer) with this tale of a family whose dark past returns with a vengeance. Loosely modeled by screenwriter Krzysztof Piesiewicz on the second act of Dante's Inferno, Hell tells the story of sisters Sophie (Emmanuelle Béart), Céline (Karin Viard), and Anne (Marie Gillain), whose lives were turned upside down when their father was imprisoned and their mother was rendered a wheelchair-bound mute. As the estranged sisters are slowly brought back together by a mysterious and handsome stranger who is somehow involved with the tragic events of the past, the questions that had for years gone unanswered slowly begin to drift into focus. ~ Jason Buchanan, Rovi

Carole Bouquet
as The Mother

Miki Manojlovic
as The father

Tiffany Tougard
as Céline As a Child

Marie Loboda
as Sophie As a Child

Emma Cuzon
as Anne As a Child

Julian Ciais
as Sébastien As a Child

Pauline Reinert
as Girl in Photo

Amandine Decroix
as Girl in Photo

Joel Templeur
as Lad Chatting With Anne in Café

Jean-Claude Roger
as Man With Newspaper in Café

Marion Aydalot
as Woman in Bed
View All