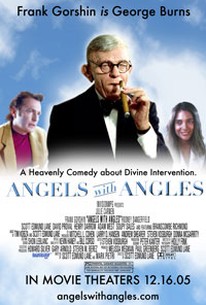 A well-known level-one angel looking to reunite with his level-six soulmate strikes a special bargain with God in this heavenly comedy featuring some of the best-loved stars of the golden-era of cinema. George Burns (Frank Gorshin) is miserable in heaven. In addition to not being able to smoke his trademark cigars, level-one angel George is also forbidden from cavorting with his level-six love Gracie Allen (Amy Wieczorek). Upon bearing witness to the misery of his forlorn heavenly guest, God makes a proposal to George; save failing musician Steven "Shoomie" Schoomer (Scott Edmund Lane) from completely destroying his life and earn the status that will let him spend eternity with his beloved Gracie. When George arrives back on Earth, he finds Schoomie a commitment-phobic wedding musician with few prospects and little hope for the future. After encouraging Schoomie to make amends with former best friend Howie Gold (David Proval) and embark on a madcap mission to sell a stash of smuggled Cuban cigars, George's plan goes awry as everyone from stealthy assassin Shelleen (Gorshin playing in a dual role) to Fidel Castro himself show a curious interest in the mysterious cigars.

Adam West
as Alfred the Butler

Richard Moll
as Robert
View All

Critic Reviews for Angels with Angles

Audience Reviews for Angels with Angles

There are no featured audience reviews for Angels with Angles at this time.