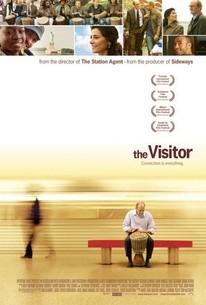 The Visitor is a heartfelt, humanistic drama that deftly explores identity, immigration, and other major post-9/11 issues.

A lonesome widower and college economics professor finds his mundane existence suddenly shaken up when he befriends a pair of illegal immigrants, one of whom has recently been threatened with deportation by U.S. immigration authorities, in the sophomore feature from The Station Agent director Tom McCarthy. Years after losing his wife, 62-year-old Walter Vale (Richard Jenkins) has also lost his passion for writing and teaching. In an effort to fill the empty void that his life has become, Walter makes a half-hearted attempt to learn to play classical piano. Later, when Walter's college sends him to a conference in Manhattan, he is surprised to discover that a young couple has moved into his seldom-used apartment in the city. Tarek (Haaz Sleiman) and his Senegalese girlfriend Zainab (Danai Gurira) have fallen victims to an elaborate real-estate scam, and as a result they no longer have a place to call home. When Walter reluctantly allows the couple to remain in his apartment, talented musician Tarek insists on repaying his host's kindness by teaching him to play the African drum. Over the course of Walter's lessons, the ageing academic finds his spirits revitalized while gaining a newfound appreciation for New York jazz clubs and Central Park drum circles. Later, Tarek is arrested in the subway and threatened with deportation after police learn that he is an undocumented citizen. Suddenly, in his attempt to help his new friend, Walter's passion for life is unexpectedly awakened. When Tarek's radiant mother Mouna (Hiam Abbass) arrives in the city in search of her son, that passion turns to romance -- something that Walter had previously thought he would never experience again. ~ Jason Buchanan, Rovi

Ramón Fernández
as Cop No. 1

Frank Pando
as Cop No. 2

Walter the Dog
as Sprinkles the Dog
View All

News & Interviews for The Visitor

Critic Reviews for The Visitor

Audience Reviews for The Visitor