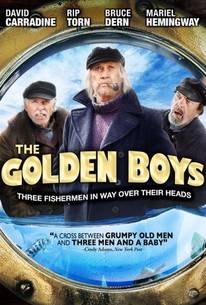 Adapted from Joseph C. Lincoln's best-selling novel Can'n Eri, this gentle tale of three retired sea captains living together and looking to get their house in order features an all-star cast including David Carradine, Rip Torn, Bruce Dern, and Mariel Hemingway. The story begins in turn of the century Cape Cod, where Captain Jerry Burgess (Torn), Captain Perez (Dern), and Captain Zeb (Carradine) decide that the only way to get their house in order is for one of them to get married. When no one jumps at the prospect of taking a bride, they decide to flip a coin and Captain Jerry is selected as the groom-to-be. After placing an ad for a mail-order bride in a big-city newspaper, the trio gets a response from Martha Snow (Hemingway), who hails from nearby Nantucket. The plan seems to be going along just fine until Captain Jerry gets cold feet, prompting Captain Perez to work overtime to keep Martha from leaving. But as Captain Jerry attempts to work up the confidence to propose, a strange thing happens: Captain Zeb falls in love with Martha and proposes. Now, if Captain Jerry can just find it within himself to forgive and old friend, this seafaring trio may find that everything will work out in the end.

Critics Consensus: 17 Again Is Sweet And Poignant
View All