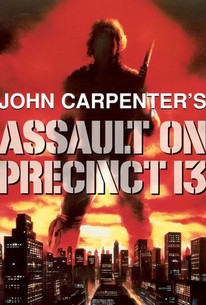 Lean, taut and compellingly gritty, John Carpenter's loose update of Rio Bravo ranks as a cult action classic and one of the filmmaker's best.

Cops, secretaries, and prisoners stuck in a soon-to-be-shuttered L.A. police station fight off a horde of murderous gang members in director John Carpenter's homage to Howard Hawks. When police officer Bishop (Austin Stoker) is left in charge of Precinct 13 on the last day it's open, he isn't prepared for the onslaught of a murderous street gang who have come into the possession of an enormous arsenal of guns. Finding himself trapped in the precinct with a pair of secretaries (Laurie Zimmer and Nancy Loomis), a few civilians and a handful of prisoners, Bishop is unable to call for help because the phones have already been disconnected and the precinct is in a run-down, out-of-the-way neighborhood. Holding out for a rescue, he and his fellow prisoners band together to barricade themselves in and hold the bandits at bay. But as the casualties mount and the supplies run low, they must choose between a daring escape attempt, a fiery offensive, or certain death. The sophomore feature from auteur-in-the-making John Carpenter, Assault on Precinct 13 reunited the director with Douglas H. Knapp, his cinematographer on 1974's Dark Star.

Critic Reviews for Assault on Precinct 13

Audience Reviews for Assault on Precinct 13