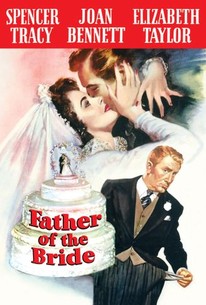 Father of the Bride

With a terrific script, great performances from Spencer Tracy and Elizabeth Taylor, and assured direction from Vincent Minnelli, Father of the Bride endures as a sparkling comedy of its era.

Father of the Bride Photos

Spencer Tracy received an Oscar nomination for his performance in this classic comedy. Stanley T. Banks (Tracy) is a securely middle-class lawyer whose daughter Kay (Elizabeth Taylor) announces that she's going to marry her beau Buckley Dunstan (Don Taylor). From that point on, everything in Stanley's life is turned upside down. His wife Ellie (Joan Bennett) wants Kay to have the kind of formal wedding that she and Stanley never had, and between meeting his soon-to-be in-laws, the socially prominent Herbert and Doris Dunstan (Moroni Olsen and Billie Burke), his man-to-man talk with the groom, hosting the engagement party, financing the increasingly lavish wedding, and wondering if Kay and Buckley will resolve their differences before arriving at the altar, Stanley barely has time to deal with his own considerable anxieties about his advancing age and how his "little girl" became a grown woman. Director Vincente Minnelli reunited with the principal cast a year later for a sequel, Father's Little Dividend; and the movie was remade in 1991 with Steve Martin and Diane Keaton. ~ Mark Deming, Rovi

William 'Bill' Phillips
as Foreman of Movers
View All

Critic Reviews for Father of the Bride

Audience Reviews for Father of the Bride

Father of the Bride Quotes