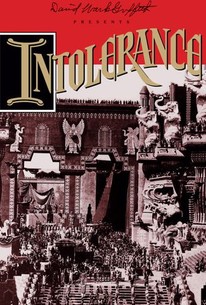 A pioneering classic and one of the most influential films ever made, D.W. Griffith's Intolerance stands as the crowning jewel in an incredible filmography.

Sometime during the shooting of the landmark The Birth of a Nation, filmmaker D.W. Griffith probably wondered how he could top himself. In 1916, he showed how, with the awesome Intolerance. The film began humbly enough as a medium-budget feature entitled The Mother and the Law, wherein the lives of a poor but happily married couple are disrupted by the misguided interference of a "social reform" group. A series of unfortunate circumstances culminates in the husband's being sentenced to the gallows, a fate averted by a nick-of-time rescue engineered by his wife. In the wake of the protests attending the racist content of The Birth of a Nation, Griffith wanted to demonstrate the dangers of intolerance. The Mother and the Law filled the bill to some extent, but it just wasn't "big" enough to suit his purposes. Thus, using The Mother and the Law as merely the base of the film, Griffith added three more plotlines and expanded his cinematic thesis to epic proportions. The four separate stories of Intolerance are symbolically linked by Lillian Gish as the Woman Who Rocks the Cradle ("uniter of the here and hereafter"). The "Modern Story" is essentially The Mother and the Law; the "French Story" details the persecution of the Huguenots by Catherine de Medici (Josephine Crowell); the "Biblical Story" relates the last days of Jesus Christ (Howard Gaye); and the "Babylonian Story" concerns the defeat of King Belshazzar (Alfred Paget) by the hordes of Cyrus the Persian (George Siegmann). Rather than being related chronologically, the four stories are told in parallel fashion, slowly at first, and then with increasing rapidity. The action in the film's final two reels leaps back and forth in time between Babylon, Calvary, 15th century France, and contemporary California. Described by one historian as "the only film fugue," Intolerance baffled many filmgoers of 1916 -- and, indeed, it is still an exhausting, overwhelming experience, even for audiences accustomed to the split-second cutting and multilayered montage sequences popularized by Sergei Eisenstein, Orson Welles, Jean-Luc Godard, Joel Schumacher, and MTV. On a pure entertainment level, the Babylonian sequences are the most effective, played out against one of the largest, most elaborate exterior sets ever built for a single film. The most memorable character in this sequence is "The Mountain Girl," played by star on the rise Constance Talmadge; when the Babylonian scenes were re-released as a separate feature in 1919, Talmadge's tragic death scene was altered to accommodate a happily-ever-after denouement. Other superb performances are delivered by Mae Marsh and Robert Harron in the Modern Story, and by Eugene Pallette and Margery Wilson in the French Story. Remarkably sophisticated in some scenes, appallingly naïve in others, Intolerance is a mixed bag dramatically, but one cannot deny that it is also a work of cinematic genius. The film did poorly upon its first release, not so much because its continuity was difficult to follow as because it preached a gospel of tolerance and pacifism to a nation preparing to enter World War I. Currently available prints of Intolerance run anywhere from 178 to 208 minutes; while it may be rough sledding at times, it remains essential viewing for any serious student of film technique. ~ Hal Erickson, Rovi

Bessie Love
as Bride of Cana

Mary Alden
as "Uplifter" and Reformer

Miriam Cooper
as Friendless One

Fred Turner
as The Girl's Father

Edmund Burns
as The 2nd Charioteer of the Priest of Bel

Max Davidson
as The Kindly Neighbor

Walter Long
as The Musketeer of the Slums

Tom Wilson
as The Kindly Policeman

Ralph Lewis
as The Governor

Lloyd Ingraham
as The Judge

A. W. McClure
as Father Farley

Dore Davidson
as The Friendly Neighbor

W.E. Lawrence
as Henry of Navarre

Tod Browning
as A Crook

Edward Dillon
as A Crook

Marguerite Marsh
as A Debutante Guest at the Ball

Barney Bernard
as Attorney for the Boy

Jennie Lee
as Woman at Dance of Jenkins's Employees

Alberta Lee
as The Wife of the Friendly Neighbor

Howard Gaye
as The Nazarene/Cardinal Lorraine

Howard Scott
as A Babylonian Dandy

Winifred Westover
as The Favorite of Egibi

Ruth Handford
as Her Mother

A. D. Sears
as The Mercenary

Chandler House
as A Page

Louis Romaine
as A Catholic Priest

George Siegmann
as Cyrus the Persian

Elmo Lincoln
as The Mighty Man of Valor

Gino Corrado
as The Runner

Wallace Reid
as A Boy Killed in the Fighting

Ted Duncan
as Captain of the Gate/Bodyguard to the Princess

Felix Modjeska
as Bodyguard to the Princess

RTIndie: Early Fest Reviews For Into the Wild, The Darjeeling Limited, and Margot at the Wedding
AFI Announces Top 100 Movies of All Time … Again
View All