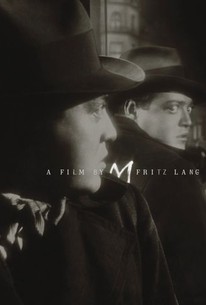 A landmark psychological thriller with arresting images, deep thoughts on modern society, and Peter Lorre in his finest performance.

Fritz Lang's classic early talkie crime melodrama is set in 1931 Berlin. The police are anxious to capture an elusive child murderer (Peter Lorre), and they begin rounding up every criminal in town. The underworld leaders decide to take the heat off their activities by catching the child killer themselves. Once the killer is fingered, he is marked with the letter "M" chalked on his back. He is tracked down and captured by the combined forces of the Berlin criminal community, who put him on trial for his life in a kangaroo court. The killer pleads for mercy, whining that he can't control his homicidal instincts. The police close in and rescue the killer from the underworld so that he can stand trial again in "respectable" circumstances. Some prints of the film end with a caution to the audience to watch after their children more carefully. Filmed in Germany, M was the film that solidified Fritz Lang's reputation with American audiences, and it also made a star out of Peter Lorre (previously a specialist in comedy roles!). M was remade by Hollywood in 1951, with David Wayne giving a serviceable performance as the killer. ~ Hal Erickson, Rovi

Fritz Odemar
as The Cheater