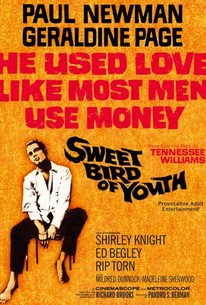 This film version of the play by Tennessee Williams is considerably toned down in comparison to the original production. Chance Wayne (Paul Newman) is an aspiring movie actor brimming with self confidence. He meets a fading movie queen named Alexandra Del Lago (Geraldine Page), whose recent screen failures are alleviated by sex, drugs and booze. She agrees to help the young actor by bringing him to Hollywood to meet "all the right people." The two stop over in Chance's hometown on their way out West. Chance's presence alarms local politician Boss Finley (Ed Begley), whose daughter Heavenly Finley (Shirley Knight) was impregnated by Chance some years earlier. Her reputation remained unsullied due to a secret abortion, but she still carries the torch for Chance. Boss Finley recruits his son Thomas (Rip Torn) to "welcome" Chance back to town. Chance is beaten to a bloody pulp by Thomas and his hired goons. At the same time, Alexandra's career is rejuvenated by a movie she thought would be a box office disaster. She cleans up her act and dreams of making a comeback in Hollywood. Ed Begley won an Oscar for best supporting actor, while Shirley Knight and Geraldine Page were nominated for the Academy Award for their performances. Chance didn't get off so easily in the stage version as he was castrated by the angry mob. This was eliminated from the film version. Despite the changes, Sweet Bird Of Youth remains a gripping, suspenseful film.

Robert Burton
as Director
View All