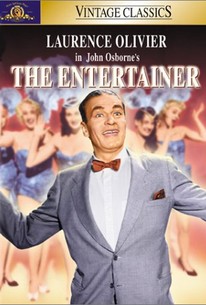 Laurence Olivier recreates his stage role of Archie Rice in this in-your-face film adaptation of John Osborne's play. The son of a legendary music hall comedian (Roger Livesey), Archie is strictly a third-rater, headlining a tacky music hall revue in a seedy seaside resort town. Archie can't admit that he's a failure, and his grim insouciance destroys everyone around him. Archie finagles his dying father into financing one last revue; he cheats shamelessly on his alcoholic wife (Brenda De Banzie); and he all but forces one of his sons (Albert Finney) to run off to join the army, only to die in the Suez. Through all his personal crises, Archie jigs and jabbers before his ever-diminishing audience, but by the end of the film he isn't even entertaining himself. Joan Plowright, who married Olivier shortly after completing The Entertainer, plays the film's one sympathetic character: Archie's daughter, whose love for her father blinds her to his flaws. The Entertainer was remade for television in 1976, with Jack Lemmon as Archie Rice and original songs by Marvin Hamlisch.

Vicky Travers
as Other Nude

Critic Reviews for The Entertainer

Audience Reviews for The Entertainer