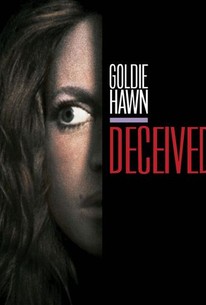 Goldie Hawn delivers a surprisingly understated performance (allowing the audience to shift their laughter from the usually comic Hawn to the unbelievable storyline) in the unsuccessful thriller Deceived. Hawn plays Adrienne Saunders, a successful art restorer who is married to Jack (John Heard), a devoted husband who is also an expert in the antiques business. Married for six years and parents of a charming 5-year-old daughter Mary (Ashley Peldon), the Saunders appear to have everything going for them. But after a series of odd occurrences that even an idiot would notice, Adrienne finally comes the conclusion that her husband is not the man she thought he was when she married him. After Jack tells Mary that he was in Boston but Adrienne's friend tells her she saw him in New York, the mysterious clues begin piling up and are too numerous to ignore: there's a call from a department store concerning some sexy lingerie that Jack purchased; a friend is found murdered after checking on the authenticity of an Egyptian necklace; and there are indications that Jack was involved with a scheme to steal artifacts from a museum. Adrienne is finally convinced that something is fishy about her husband when he mysteriously dies is an auto wreck, and she discovers that Jack has been using the name of a man who had died 16 years earlier. Adrienne proceeds to polish her magnifying glass and conducts some detective work on her own to find out who her husband really was. This is when the danger really begins.

Kim Staunton
as Board of Education Woman