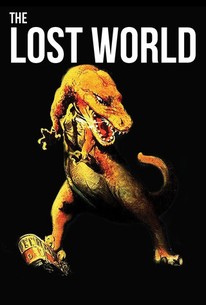 This adventure virtually butchers its source, Sir Arthur Conan Doyle's classic novel. But with stop-motion photography and special effects that were incredibly innovative in 1924 and 1925, who cared? These effects were the whole film, and Wallace Beery's inspired performance was a bonus. The tale opens on reporter Edward Malone (Lloyd Hughes), who wants to marry Gladys Hungerford (Alma Bennett). Gladys, however, only wants to marry a man of great deeds. So Malone, having asked his editor for an adventuresome assignment, is given the task of interviewing Professor Challenger (Beery), who is planning an expedition to a "lost world." Malone accompanies Challenger and his men to South America where, on a great plateau, they find a prehistoric world occupied by dinosaurs and ape-like men. They barely escape with their lives, but they manage to bring a brontosaurus back to London. The beast breaks out and terrorizes the city before crashing through the London bridge and swimming out toward the ocean to freedom. In the midst of all this, Malone has fallen in love with Paula White, the daughter of an explorer (Bessie Love). Since Gladys, it turns out, has married a clerk, Malone is able to wed his new sweetheart.

Critic Reviews for The Lost World

Audience Reviews for The Lost World