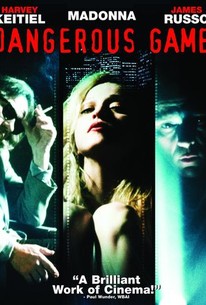 Celebrated indie filmmaker Eddie Israel (Harvey Keitel) heads to California to shoot his latest movie, Mother of Mirrors, an examination of a marriage in which the wife pressures her husband to abandon their formerly mutual sex-and-drugs lifestyle and seek the same kind of religious conversion she has experienced. Leaving behind his own wife Madlyn (Nancy Ferrara) and his young son, Eddie explains the impetus of his latest project in a series of behind-the-scenes interviews. Meanwhile, Sarah Jennings (Madonna), a TV actress, has taken the wife role in Eddie's film, and her first item of business on the set is to sleep with Francis Burns (James Russo), who is set to play her husband. Things go sour between the two players and their conflicts spill onto the set, adding even more tension to a shoot in which Eddie alternately bullies and cajoles his actors to elicit more authentic performances. Perhaps Eddie manipulates Sarah onscreen because he's ashamed of having bedded his "very L.A." star just minutes before his wife and son arrived early for a weekend visit. Eddie soon finds the existential dilemmas of his film seeping into his own life, forcing him to question the compulsive adultery he practices. One of the first movies overseen by the film arm of Maverick, the record label and media company Madonna founded in the early '90s, Dangerous Game was produced by the singer's longtime manager, Freddy de Mann, alongside Mary E. Kane, who produced several earlier Ferrara efforts.

Victor Argo
as Director of Photography

Niki Munroe
as Girl in Trailer

Robyn B. Ashley
as Flight Attendant