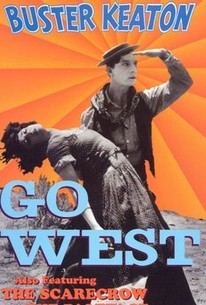 With this delightful film, Buster Keaton rivals Charlie Chaplin for comic poetry and pathos. Keaton's character, known only as Friendless, is a Midwestern boy who is down on his luck. After an abortive attempt to get by in the city, he follows Horace Greeley's advice to "Go West, young man!" As a result, Friendless winds up on a cattle ranch and is about the most unlikely cowboy imaginable (in fact, he never does trade in his porkpie hat for a ten-gallon). Various bits of comic business abound; standouts include the milking scene and a card game in which Friendless accuses a player of cheating. The sharpie tells The Great Stone Face "When you say that -- smile!" More importantly, Friendless finds true love -- not with the rancher's daughter (Kathleen Myers) but with Brown Eyes, a cow who seems nearly as out of place in the herd as Friendless does on the ranch. Cow and boy become devoted, but Brown Eyes is headed for the slaughterhouse. Friendless resolves to rescue her, sneaking on the train that's taking her and thousands of other cattle to the Los Angeles station. The herd escapes from the cattle cars at the destination and runs amok through downtown L.A.; it is then up to Friendless to round them up. Look closely during the hilarious stampede scene -- Roscoe "Fatty" Arbuckle plays a part in drag, and Keaton's father also has a bit in a barber shop. With the help of a costume shop, Friendless saves the day...and his cow. Go West is Keaton's most heartfelt film, and certainly one of his most underrated.

Howard Truesdale
as The Ranch Owner

Howard Truesdell
as The Ranch Owner

Brown Eyes the Cow
as Herself