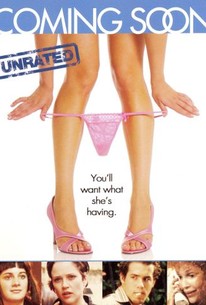 Coming Soon is yet another youth comedy about the sexual misadventures of a group of high school students, but with a difference -- this time, it follows three teenage girls who are in search of sexual and romantic fulfillment. Nell (Tricia Vessey), Jenny (Gaby Hoffmann), and Stream (Bonnie Root) are three friends enrolled at a respected private school, busy finishing up their senior year and trying to get into good colleges. But academia is not the only thing occupying their minds, especially when Stream admits to her friends that she's never had an orgasm. Jenny and Nell quickly decide they must find Stream a boyfriend who can solve this problem once and for all. But neither of them has been doing much better; while both have had their share of significant others, none has been especially concerned their pleasure, leaving both young women unsatisfied. Stream's fling with big man on campus Chad (James Roday) deprives her of her virginity but leaves her no closer to her stated goal; however, she meets Henry (Ryan Reynolds), a guy who is too much the individual to fit in at school but seems interested in her; he is also, for a change, not obsessed with himself. The supporting cast includes Spalding Gray as a guidance counselor and Ryan O'Neal and Mia Farrow (reunited nearly 35 years after appearing together on TV's Peyton Place) as Stream's parents.

Seth Michael May
as Freckled Kid

There are no featured audience reviews for Coming Soon at this time.