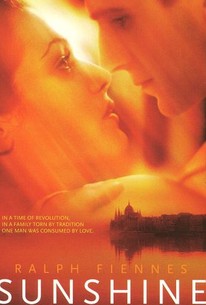 The fortunes of a family of Hungarian Jews are followed over the course of nearly 150 years in this epic historical drama, with leading man Ralph Fiennes playing three different roles. The story begins in the late 18th century, as Aaron and Josefa Sonnenschein (the name means "Sunshine" in German) die in an explosion while making an herb tonic for sale in their village. Their son Emmanuel (David de Keyser), the only survivor of the tragedy, travels to Budapest, carrying the recipe for the medicine with him. He's able to parlay the formula into a successful business, and Emmanuel and his wife Rose (Miriam Margolyes) raise two sons, Ignatz (Ralph Fiennes), who becomes a successful lawyer, and hot-tempered Gustave (James Frain). The Sonnenscheins also make room in their home for Valerie (Jennifer Ehle), but Emmanuel and Rose become furious when Valerie becomes romantically involved with Ignatz. Eventually, Valerie and Ignatz raise two children, Istvan (Mark Strong) and Adam (Ralph Fiennes), and the family changes its name to Sors in hopes of avoiding the anti-Semitism sweeping Europe. In time, Adam goes so far as to convert to Catholicism, and he marries another Catholic, Hannah (Molly Parker). He soon begins an affair with his brother's wife, Greta (Rachel Weisz), who is unable to persuade Adam to leave as the Nazis rise to power. Adam and Hannah have only one son, Ivan, who is fated to watch his father die in a concentration camp; as Ivan grows to adulthood (now played by Ralph Fiennes), he swears revenge on the forces of fascism and embraces Communism. Ivan throws in his lot with Communist leader Andor Knorr (William Hurt), but a liaison with the wife of a party official (Deborah Kara Unger) leads Ivan to tragic consequences and a jail term. In time, Valarie and Gustave are reunited at the family's estate as the only two members of the Sonnenschein clan who survive to witness the Hungarian Revolution in 1956. Hungarian director Istvan Szabo co-wrote Sunshine's original screenplay in collaboration with American playwright Israel Horovitz.

Kati Sólyom
as Landlady in Vienna

Bill Paterson
as Minister of Justice

Sandor Simo
as Doctor No. 2

Zoltan Gera
as Man at Synagogue

Balint Trunko
as Istvan at 18

Ádám László
as Emmanuel at 12

Tamás Raj
as Rabbi at Wedding

Kati Sályom
as Landlady in Vienna

Bálint Trunká
as Istvan at 18

Ica Gurnik
as Woman in Hospital

János Nemes
as Ivan at 16