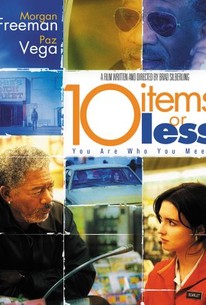 A small film that relies too heavily on the charm of its big actors.

An aging Hollywood icon whose fear of failure has caused his once-luminous star to smoulder strikes up an unlikely friendship with an acid-tongued checkout clerk while researching his latest role in City of Angels and Moonlight Mile director Brad Silberling's intimate drama. Crippled by his own all-consuming fears, the man who was once Hollywood's hottest icon (Morgan Freeman) is forced to consider a role in a low-budget independent after a series of more lucrative prospects wither away on the vine. When his driver abandons him during a trip to Carson to research his upcoming role, the onetime showbiz supernova strikes up a lively conversation with Scarlet (Paz Vega), an outspoken check-out girl at a Latino community market. Now, stuck on his own, far from Brentwood, the actor must rely upon the kindness of a common stranger to help him get back on his feet.

Morgan Freeman
as Him

Jonah Hill
as The Kid

News & Interviews for 10 Items or Less

RTIndie: Stephen Frears Talks "The Queen" and Oscars; Almodovar And Cruz To Re-Team; Slamdance Lineup Set
Critical Consensus: "Nativity" Is Too Safe; "Turistas" Not Worth Trip
TORONTO: "Away From Her," "The Prisoner," "El Cantante," And More Purchased at Fest
View All

Critic Reviews for 10 Items or Less

Audience Reviews for 10 Items or Less