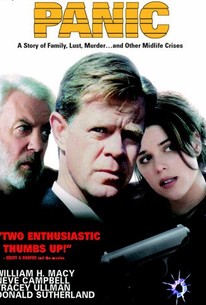 This quirky little film about a gangster in therapy feels fresh and well-crafted.

A middle-aged man finds love in the last place he was looking -- his psychiatrist's waiting room -- in this dark comedy drama. Alex (William H. Macy) is a man in his mid-forties who is having something of a midlife crisis; he's unhappy with his life; his marriage to Martha (Tracey Ullman) is going through a rough patch; he's worried about his six-year-old son, on whom he dotes; and he wishes he hadn't bucked under to the wishes of his domineering father Michael (Donald Sutherland) and started working in the family business. Making things even more problematic is the family's line of work -- Alex is a killer-for-hire. Alex feels as if he's about to unravel from stress when he begins seeing Josh (John Ritter), a psychiatrist. One day, while waiting for his session with Josh, Alex meets Sarah (Neve Campbell), a sweet, pretty, but severely neurotic young woman with an omnivorous sexual appetite. Alex and Sarah take an immediate liking to one another, and Alex begins to pursue a romance with her, though he knows an affair could create more problems than it solves, especially after Michael informs Alex that Josh is his next target. Panic marked the feature debut for writer/director Henry Bromell, who previously distinguished himself as a novelist and a television producer. The supporting cast includes Barbara Bain as Alex's mother, who helped get her husband started in the business.

Greg Pitts
as Alex at 20

Barbara Bain
as Deidre
View All