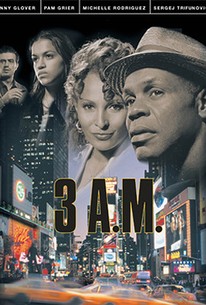 New York City may be the city that never sleeps, but that means some people have to stay awake all night to look after the folks whose days begin after the sun goes down; this made-for-premium-cable drama looks at a group of cabbies trying to get by while working the night shift. The Lady Luck Cab Company is a taxi service run by Box (Sarita Choudhury), who inherited the failing business from her late father and is struggling to keep it afloat against long economic odds as Lady Luck's drivers work long shifts in some of the Big Apple's less picturesque neighborhoods. Hershey (Danny Glover), one of Lady Luck's drivers, was once a professional boxer, but when his athletic career went south, so did his wife, and now he drives a hack while trying to romance George (Pam Grier), a good-looking waitress who likes Hershey, but is frustrated with his schedule, which rarely allows him a night off. This is bad news for Hershey, since Ralph (Paul Calderon), a regular at the diner where George works, has been making a play for her as well. Another driver, Salgado (Michelle Rodriguez), is a short-fused Latin American woman who is frequently the victim of sexual harassment from her customers, which makes her all the more difficult to be around. Jose (Bobby Cannavale) thinks he's hit the jackpot when he discovers a briefcase full of cash has been left in his cab, though he has reason to believe it's stolen. And Rasha (Sergej Trifunovic), a refugee from Bosnia, is still tormented by the violence that cost his family their lives, and has trouble concentrating on his driving, leading him into more than one auto accident. While the drivers deal with their individual dilemmas, all of them are suddenly wary of their customers, thanks to reports of a serial killer preying on New York's cab drivers. Produced for the Showtime premium cable network, 3 A.M. was screened at the Sundance Film Festival prior to its broadcast debut, where it earned an enthusiastic reception.

Walt Frazier
as Himself

There are no critic reviews yet for 3 A.M.. Keep checking Rotten Tomatoes for updates!