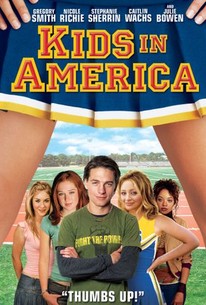 An awkward blend of teen comedy and social commentary, Kids in America largely fails to provoke thought or laughter.

Teenagers stand up for their rights and take on the woman who wants to scuttle their freedoms in this comedy drama inspired by a true story. Principal Weller (Julie Bowen) is the ambitious but hard-headed leader of Booker High School. Weller plans to run for superintendent of her school district, and believes if she wants to win she needs to project the image of a no-nonsense leader, and with that in mind she begins cracking down on what she sees as discipline problems at Booker High. However, in many cases what she sees as kids out of control are seen by others as kids expressing themselves, including a girl who wants to distribute condoms to recognize National Safe Sex Day, and two boys who are caught kissing in the hallway between classes. Mr. Drucker (Malik Yoba) is a teacher at Booker who tries to champion the students' rights of free expression, but his conflicts with Principal Weller end up costing him his job when he's fired for questioning her authority. Holden Donovan (Gregory Smith) is a student at Booker who is alarmed that the students have lost one of their few allies, and decides to do something about it -- along with his classmates, he sets out to establish and defend the right of free expression for high-school students, and launches a campaign against Weller's bid to become superintendent. Kids in America also stars Stephanie Sherrin, Nicole Richie, Adam Arkin, George Wendt, and Elizabeth Perkins. ~ Mark Deming, Rovi

Malik Yoba
as Will Drucker

Jimmy Messer
as Guitarist
View All

Critic Reviews for Kids in America

Audience Reviews for Kids in America