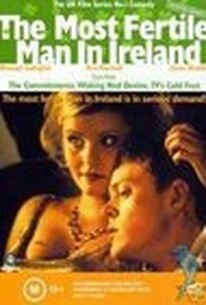 The Most Fertile Man in Ireland

The Most Fertile Man in Ireland Ratings & Reviews Explanation

The Most Fertile Man in Ireland Photos

Fate turns the most lovelorn man in Belfast into a sexual dynamo in this eccentric comedy. Eamonn (Kris Marshall) is a physically unimpressive and socially inept 24-year-old virgin who lives in Belfast with his mother (Olivia Nash), who conceived Eamonn during a one-night-stand with a low-rent lounge singer passing through town. Eamonn is far too shy to ask a girl out on a date, and his appearance hardly has the ladies lining up around the block, but one day local sexpot Mary Malloy (Tara Lynne O'Neill), figuring she's made her way through nearly every other man in town, decides to take the initiative with Eamonn. To Mary's surprise, she discovers Eamonn is a sexual prodigy with a physical gift that would make the late John Holmes proud, and with one satisfied woman under his belt, Eamonn finally works up the nerve to ask out Rosie (Kathy Kiera Clarke), a girl from a nearby funeral home. But before Eamonn can actually take Rosie out on the town, Mary learns she's pregnant, even though she was using birth control. A doctor discovers that Eamonn has a remarkably high sperm count, and with birth rates plummeting among Ireland's Catholic families, Millicent (Bronagh Gallagher) gets the idea of hiring Eamonn out to father children with women whose husbands have been unable to do the job; Eamonn even does so with the blessings of the local Catholic clergy, who find Eamonn's "service" less morally problematic than artificial insemination. The Most Fertile Man in Ireland marked the directorial debut of actor Dudi Appleton. ~ Mark Deming, Rovi

Critic Reviews for The Most Fertile Man in Ireland

Audience Reviews for The Most Fertile Man in Ireland

The Most Fertile Man in Ireland Quotes