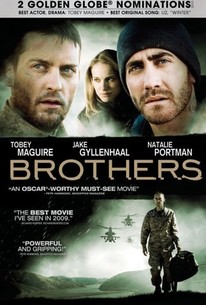 It plays more like a traditional melodrama than the Susanne Bier film that inspired it, but Jim Sheridan's Brothers benefits from rock-solid performances by its three leads.

Jim Sheridan's film, adapted from Susanne Bier's 2004 movie, concerns Captain Sam Cahill (Tobey Maguire), a Marine who receives orders to ship out for yet another tour of duty in Afghanistan. But before he leaves his supportive wife, Grace (Natalie Portman), and his two elementary-school-age daughters, Sam picks up his black sheep brother, Tommy (Jake Gyllenhaal), who has finished a prison stretch for robbing a bank. While overseas, Sam's aircraft gets shot down and he's thought dead. Back home, irresponsible Tommy gets his act together in order to be an anchor for Grace and the girls, and the two grow emotionally -- though not physically -- close. As the family finally begins to make peace with their grief, soldiers rescue POW Sam and he returns home. Sam's experiences overseas have caused him such emotional turmoil, he has a difficult time adjusting to civilian life, and soon his fear and paranoia manifest themselves in the form of jealousy for his brother's relationship with his wife. Sam Shepard and Mare Winningham co-star as the brothers' father and stepmother. ~ Perry Seibert, Rovi

Luce Rains
as The Nose

Oscar Meija
as Uniform in Helicopter

Oscar Mejia
as Uniform in Helicopter

Janet Sanford
as Mourner at Church #1

Casey Sanford
as Mourner at Church #2

Colleen Frye
as Woman in Church

James Duffy
as Man in Church

Carol A. Salazar
as Woman on Bridge

Wendell Sweet
as Orderly
View All