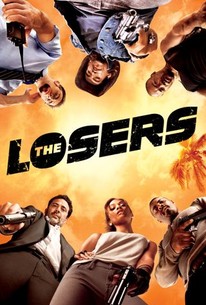 The Losers is loud, fast, and unrelentingly violent -- but it's also funny and well-acted, which will make all the difference for some action fans.

Director Sylvain White adapts the Vertigo comic about a team of mercenaries who wage war on the CIA after they're double-crossed in the field and left to die. Clay (Jeffrey Dean Morgan), Jensen (Chris Evans), Roque (Idris Elba), Pooch (Columbus Short), and Cougar (Óscar Jaenada) were on a black-ops mission in the Bolivian jungle when rogue CIA agent Max (Jason Patric) hung them out to dry. After beating the odds and surviving their ordeal, the team decides to strike back against Max even if it means sacrificing their own lives to do so. Aiding them on their treacherous suicide mission is sexy operative Aisha (Zoe Saldana), who has her own reasons for wanting to see Max get his just deserts. But getting to Max won't be easy, because in addition to having the CIA on his side, he's about to spark a war that could plunge the entire globe into chaos. Their time quickly running out as Max's plan kicks into overdrive, the Special Forces unit that everyone assumed dead arms themselves to the teeth and prepares to strike back with a vengeance. ~ Jason Buchanan, Rovi

Marcos Davila
as Thug on Bus

Krissy Korn
as Referee
View All

News & Interviews for The Losers

Critics Consensus: The Back-Up Plan Is Second Rate
View All

Critic Reviews for The Losers

Audience Reviews for The Losers