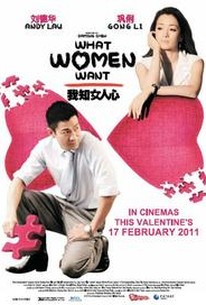 Chauvinistic advertising executive Sun Zigang gains the power to read women's thoughts in a bathroom mishap, and becomes an instant expert on all things related to the fairer sex while scheming to steal the ideas of an ambitious female colleague. Sun's personal life is falling apart; his wife has left him for another man, and his adolescent daughter gives him nothing but attitude. None of this really fazes Sun, though, because all he can think about is getting promoted to creative director at the advertising agency where he works. But when distinguished executive Li Yilong swoops in from another firm and snatches the job right from under Sun's nose, the incensed cad starts to fear that his career may be over. Later, while attempting to soothe his frazzled nerves with some wine and a warm bath, Sun dons women's clothing in a drunken bid to better understand the opposite sex, accidentally knocks a lamp in the bathtub, and gets the shock of his life. Upon regaining consciousness, Sun finds himself in the hospital, and quickly realizes that he now possesses the power to know what women are thinking. At first Sun decides to have some fun around the office by expounding on his uncanny insight into the opposite sex, but when he begins using his newfound abilities to steal Yilong's ideas, he finally pushes things too far. ~ Jason Buchanan, Rovi

Critic Reviews for What Women Want

Audience Reviews for What Women Want