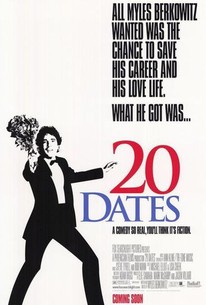 20 Dates explores relatable romantic and career frustrations -- unfortunately, it does so through the exploits of someone who's hard to watch and harder to root for.

Myles Berkowitz wrote and directed this mock documentary about a filmmaker who gets a producer to finance his personal search for a girlfriend, filming the odyssey on a $60,000 budget. In the opening credits, Berkowitz tries to drive onto studio lots without success. His first date observes that the film is really only about himself, and his second date exits the restaurant and doesn't return. After a discussion with script analyst Robert McKee, he decides to use hidden cameras -- which bring only the threats of lawsuits. After he meets shop girl Elisabeth (Elisabeth Wagner) and they become a twosome, he attempts to renegotiate his contract by stopping at 17 instead of 20 dates. This film was awarded the audience prize at the 1998 Slamdance Film Festival.

Myles Berkowitz
as Himself

Elisabeth Wagner
as Herself

Tia Carrere
as Herself

Robert McKee
as himself

Elie Samaha
as Voice of the Producer, Producer

Signy Coleman
as Herself

Letitia Fox
as Herself

Stephanie Magid
as Herself

Julie McCullough
as Herself - Date #17

Sharon Saks
as Herself

Stacy Sanches
as Herself

Tava Smiley
as Herself

Sydne Squire
as Herself - the ex-wife (uncredited)
View All

There are no featured audience reviews for 20 Dates at this time.