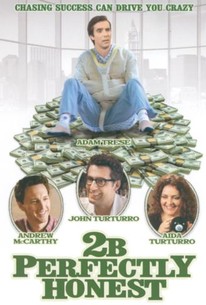 Frank (Adam Trese of Laws of Gravity) is in trouble. His dot-com start-up collapses before it goes online, essentially bankrupting him and his partner, Josh (Andrew McCarthy). Frank is forced to leave his fancy Manhattan apartment and move back in with his parents (Robert Vaughn and Hayley Mills), and he can't even bring himself to tell them he's failed. His kooky friend Sal (John Turturro) warns Frank that his priorities are wrong, and sends him to Gina (Aida Turturro), a cheerful psychic. Then Frank comes up with a new idea tailor-made for the dot-com bust, but the first potential investor he meets with, Abrams (Mark Margolis), seems more interested in Frank's diet than his idea, and the second guy (Michael Badalucco) he meets with threatens to steal the idea, causing Frank to collapse in a sweaty panic. Then Abrams calls again. While Frank's project is too small for him to handle, he knows a couple of guys. Soon Frank and Josh are working again, with a new office and a new CFO, Peter (Bruce MacVittie). Things are going swimmingly, until Frank takes a closer look at the books, and begins to suspect that his investors are using the company to launder money. 2BPerfectlyHonest marks the feature debut of writer/director Randel Cole. The movie had its world premiere at the 2004 Tribeca Film Festival.

Shirley Rumierk
as Hostess
View All

Critic Reviews for 2b Perfectly Honest

There are no critic reviews yet for 2b Perfectly Honest. Keep checking Rotten Tomatoes for updates!

Audience Reviews for 2b Perfectly Honest

There are no featured audience reviews for 2b Perfectly Honest at this time.