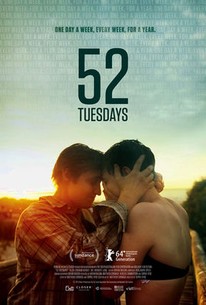 52 Tuesdays honors the complexity of familial bonds and gender identity with an intimate, well-acted, and overall empathetic drama.

Directed by Sophie Hyde (Shut Up Little Man! An Audio Misadventure), the Australian filmmaker who won the Directing Award: World Cinema Dramatic at last year's Sundance Film Festival, 52 TUESDAYS is centered on the relationship between James (Del Herbert-Jane), a mother undergoing gender transition, and her precocious teenage daughter Billie (Tilda Cobham-Hervey). Looking forward to starting his gender transition but weary of how the process might affect his daughter, James asks Billie to move in with her father Tom (played by Beau Travis Williams). To make up for the abrupt separation, mother and daughter make a commitment to meet every Tuesday afternoon, no matter what. As the year progresses, James and Billie watch each other change in ways that sometimes threaten their once-unshakable relationship. As both individuals explore deep personal issues and struggle to remain connected, a complex tale of human desire and ultimately, physical and psychological transformation, emerges. (C) Kino Lorber

Now Streaming: It Follows, The Second Best Exotic Marigold Hotel, and More
Critics Consensus: Home Is Colorful but Too Familiar
View All

There are no featured audience reviews for 52 Tuesdays at this time.