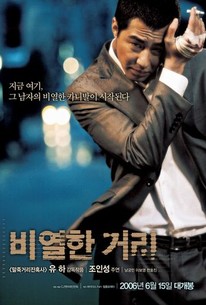 A small time thug collecting debts for the local triad is torn between his criminal aspirations and his devotion to family in writer/director Yoo Ha's epic crime drama. Byeong-du (Jo In-seong) is a twenty-nine year-old Seoul gangster who's looking to rise up through the ranks. Though his ambition is unmistakable, Byeong-du finds his family's financial problems taking a heavy emotional tool as he attempts to intimidate the locals into paying off their lingering debts. It seems that a local real-estate developer is attempting to pressure Byeong-du's mother into selling the family home, but Byeong-du's boss Sang-cheol (Yun je-mun) can't be bothered to care about the problems of his low-level cog. When a rival gang shows up looking to put the hurting on Byeong-du's gang, Sang-cheol blatantly violates the gangster code and Byeong-du becomes right hand man to powerful crime kingpin Hwang Heui-jang (Cheon Ho-jin). Later, after cementing his loyalty to Hwang by killing a local prosecutor, Byeong-du runs into former school chum Min-ho (Nam-gung Min). It seems that Min-ho is about to shoot a gangster film, but first he needs some help getting the script finished. Unfortunately for all involved, Byeong-du's fateful decision to help out his old friend will have tragic consequences.