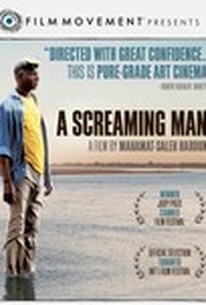 Film Forum is pleased to present the U.S. theatrical premiere of A SCREAMING MAN, written and directed by Mahamat-Saleh Haroun, beginning Wednesday, April 13. Shot in Chad, portraying the psychological fall-out of an endless civil war, A SCREAMING MAN is titled ironically, from a director who credits Ozu as his strongest influence. Adam is a former swimming medalist, now a 60-year-old hotel employee and head "pool man," who maintains this calm oasis as much for his own benefit as for the hotel's Western guests. The tensions between Adam and Abdel, his adult son, are exacerbated when he loses his job to the younger man and their fragile world begins to crumble. Complicating their relationship is the fact that rebel forces are at war with the authorities, and civilians like Adam and Abdel are under pressure to support the government. With subtlety and grace, Haroun's modern fable eschews histrionics for a smart, restrained, yet deeply feeling drama in which personality, politics and place define its characters' reality. A SCREAMING MAN was the winner of the Grand Jury Prize at the 2010 Cannes Film Festival.--(c)Film Movement

Sylvain Mbaikoubou
as The New Cook

Abdou Boukar
as The Maitre d'hotel

Mahamat Choukou
as Soldier at Roadblock

Tourgoudi Oumar
as Soldier at Roadblock

News & Interviews for A Screaming Man

Critic Reviews for A Screaming Man

Audience Reviews for A Screaming Man