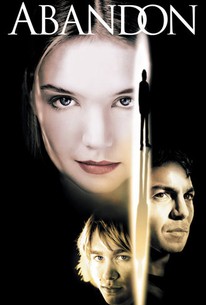 The plotline for Abandon is too disjointed and muddled to offer much in the way of thrills.

A young woman is faced with the disturbing reemergence of a man she once loved in this psychological thriller. Embry Langan (Charlie Hunnam) was a wealthy but reckless student at an exclusive private college until he mysteriously vanished, with airline tickets to Europe left unused and plenty of money still in the bank. Two years later, Katie Burke (Katie Holmes), Embry's girlfriend, is still dealing with his disappearance as she goes into the home stretch of her college career. With exams, a thesis, and job interviews to think about, Katie is already walking an emotional tightrope when Wade Handler (Benjamin Bratt), a police detective, enters the picture. Handler, a recovering alcoholic, has been ordered to reopen the Langan case, and as he questions Katie about the missing man, she finds her obsession with her former beau taking over her life, which leaves her all the more unnerved when she begins seeing Embry around the campus. Meanwhile, Handler's investigation begins to suggest Langan's disappearance may have been more sinister than imagined, and could be connected with other cases of missing students. Abandon marked the directorial debut for screenwriter Stephen Gaghan, who won an Oscar for his script for Traffic.

Will McCormack
as August

David Gow
as Passerby Outside Plum

Ryan Wilner
as Student in Cafeteria