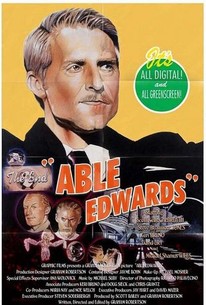 A handful of businessmen face the question of who is real and who is not as they look back on the life, death, and second life of an iconic American in this satiric comedy drama. In the future, after a variety of disasters have decimated the Earth, the world's population has been relocated to a number of huge satellites, and several large corporations have the fate of the survivors in a stranglehold; however, the once powerful Edwards Corporation, founded by beloved entertainment mogul Abel 'Able' Edwards (Scott Kelly Galbreath), has fallen on hard times, and the leaders of the company feel they need to give their robotics business a jump start. With this in mind, they take the unusual step of cloning a new version of the long-deceased Abel Edwards to serve as the firm's new figurehead. Their plan backfires, however, when the replacement Edwards turns out to have different ideas about what's best for the company than the board of directors, as he attempts to move the company away from robotics and virtual reality back into the theme parks and tangible entertainment experiences that were the stuff of his predecessor's glory days. So who is in control -- the clone or the people who created the clone? Able Edwards was shot on digital video using green-screen techniques which allowed the movie to be shot without any standing sets; backgrounds and special effects were created digitally and added to the images after the fact. Steven Soderbergh served as executive producer for the project.