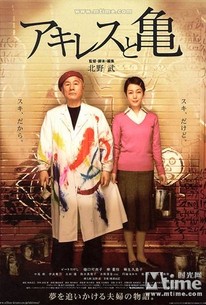 Achilles to kame (Achilles and the Tortoise)

Achilles to kame (Achilles and the Tortoise) Ratings & Reviews Explanation

Director and screenwriter Takeshi Kitano charts the strange career arc of a struggling artist in this offbeat comedy-drama. Machisu Kuramochi (Reo Yoshioka) is the son of a successful businessman (Akira Nakao) with a passion for art, and at an early age Machisu decides he wants to make painting his career. When his father commits suicide after the collapse of his business, Machisu's stepmother (Mariko Tsutsui) sends him to live with an aunt and uncle who encourage him to hone his talent. As a teenager, Machisu (now played by Yurei Yanagi) attends art school and finds his traditional style of painting challenged by the more experimental and conceptual work turned in by his classmates. However, Machisu strikes up a friendship with a fellow student, Sachiko (Kumiko Aso), who encourages him to follow his own muse and paint what he loves. Machisu and Sachiko become lifelong friends, and as they enter heir fifties, both are still painting in the style that they established in their youth. However, while Sachiko (played as an adult by Kanako Higuchi) has found an original voice in his work, it's become increasingly obvious with the passage of time that Machisu (Beat Takeshi) has borrowed all he knows from the artists he loves without bringing much of his own personality to the picture. Akires to kame (aka Achilles and the Tortoise) received its North American premiere at the 2008 Toronto Film Festival. ~ Mark Deming, Rovi

Critic Reviews for Achilles to kame (Achilles and the Tortoise)

Audience Reviews for Achilles to kame (Achilles and the Tortoise)

Achilles to kame (Achilles and the Tortoise) Quotes