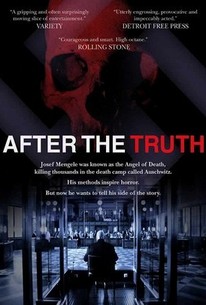 While a number of American and European films have examined the horrible legacy of the Third Reich and the Holocaust, Du Sollst Nicht Toeten is one of the first dramatic films from Germany to examine the crimes of the Nazi era and their impact on the German psyche. Peter Rohm (Kai Wiesinger) is a successful lawyer living in Berlin with his wife Rebekka (Karoline Eichhorn). One day, Peter receives an unusual package in the mail -- a Nazi officer's uniform. Puzzled, Peter does some research which suggests that the uniform once belonged to fugitive war criminal Josef Mengele. Peter is soon visited by a mysterious stranger named Mueller (Heinz Trixner), who slips him a powerful drug. When he awakes, Peter is in Argentina, where he's introduced to an elderly man who has lived for years under the name Heinz Baumgarten, but announces that he is in fact Joseph Mengele (Goetz George). Mengele has decided to return to Germany to stand trial for war crimes, and he wants Peter to represent him; Peter reluctantly agrees. As the German media goes into a frenzy and angry demonstrations crowd the streets, Mengele calmly argues that he was merely a research scientist whose work ultimately aided humanity, and that no firm evidence links him to any murders. While a handful of eyewitnesses offer support to the accusations against Mengele, no one seems able to present hard evidence that contradicts Mengele's claims. Adapted from a screenplay by American writers Christopher Riley and Kathleen Riley (which no U.S. producers were willing to film), Du Sollst Nicht Toeten so impressed Goetz George that he helped finance the film to the tune of one million marks; Kai Wiesinger was also enthusiastic about the material and waived his usual fee in order to aid production of the picture. ~ Mark Deming, Rovi

Critic Reviews for After the Truth (Nichts als die Wahrheit)

There are no critic reviews yet for After the Truth (Nichts als die Wahrheit). Keep checking Rotten Tomatoes for updates!

Audience Reviews for After the Truth (Nichts als die Wahrheit)

There are no featured audience reviews for After the Truth (Nichts als die Wahrheit) at this time.