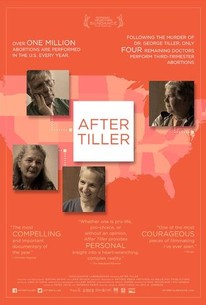 After Tiller applies empathy, honesty, and graceful understatement to a discussion that all too often lacks them all.

In 2009, Dr. George Tiller of Wichita, Kansas-one of the only doctors in the US who performed third-trimester abortions-was gunned down in his church. He was the eighth abortion clinic worker to be assassinated since the Supreme Court passed the Roe v. Wade decision, which legalized abortion, in 1973. There are now only four doctors in the country-all former colleagues of Dr. Tiller-who openly provide late abortions, a procedure considered highly controversial even among those who consider themselves pro-choice. AFTER TILLER weaves together revealing interviews with the doctors with intimate scenes from their private lives and inside their clinics, where they counsel and care for their vulnerable patients. The personal and moral struggles of several of these women are revealed, forcing us to step into the shoes of both patient and practitioner as they confront the full complexity of each decision. (c) Oscilloscope

News & Interviews for After Tiller

RT on DVD & Blu-Ray: Her and That Awkward Moment
Critics Consensus: Prisoners is Certified Fresh
View All

Critic Reviews for After Tiller

Audience Reviews for After Tiller