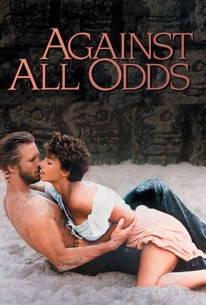 Against All Odds Ratings & Reviews Explanation

Against All Odds Photos

Once past the pulse-pounding car-chase opening sequence of Against All Odds, sharp-eyed viewers will be able to figure out that this 1984 suspenser is a remake of the 1947 noir classic Out of the Past. Forced off the field due to a shoulder injury, football player Terry Brogan (Jeff Bridges) takes a job with crooked nightclub owner Jake Wise (James Woods). Brogan isn't fond of his new boss, but he isn't much better himself, having previously shaved points during a game at Wise's behest. When Wise's girlfriend Jessie Wyler (Rachel Ward) skips town with a great deal of money, Brogan is sent to fetch her back. Once in Mexico, Brogan and Wyler fall in love, weakening his resolve to go through with his job. When Brogan fails to carry out his orders, another of Wise's hired hands (Alex Karras) is sent out to retrieve both Brogan and Wyler. During a struggle, the thug is killed by Wyler, who for the first time in the film demonstrates that she isn't the victim of circumstance she pretends to be. Upon his return to the U.S. -- minus Wyler, who's taken another run-out powder -- Brogan becomes enmeshed in a shady Chinatown-like business deal involving Wise and a real-estate fat cat (Richard Widmark) -- who happens to be married to Wyler's mother. Like Past, Against All Odds is based on the Daniel Mainwaring novel Build My Gallows High, and Jane Greer, who played the Rachel Ward character in the earlier film, is here cast as Ward's mother. Phil Collins wrote and sang the Oscar-winning theme song.

Ted White
as Guard with Dog

Taryn Hagey
as Coconut
View All

Critic Reviews for Against All Odds

Audience Reviews for Against All Odds

Against All Odds Quotes