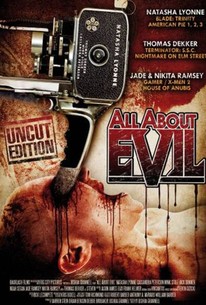 All About Evil Ratings & Reviews Explanation

A novice director teams up with some folks dying to get into the movies in this comedy thriller. Deborah (Natasha Lyonne) is a socially awkward librarian whose father runs the Victoria Theater, a crumbling old movie house favored by film buffs. When Deborah's dad dies unexpectedly, the family inherits the theater, and while Deborah wants to keep it open, her mother would rather sell it to developers eager to open a Bed, Bath And Beyond in the neighborhood. An argument between Deborah and her mom turns violent, and Deborah ends up killing her; a surveillance camera captures the bloody assault and by accident it's projected onto the screen at the Victoria, where the jaded movie geeks eat it up. Suddenly Deborah decides she's found her calling as a filmmaker, surrounding herself with a retinue of eccentric would-be stars and shooting bloody horror flicks on shoestring budgets. But what her fans don't know is that Deborah isn't using a special effects man, and the bloody killings in her film are the real thing. All About Evil features a handful of cult film favorites in supporting roles, among them John Waters regular Mink Stole and Cassandra Peterson (better known as "Elvira, Mistress Of The Dark"). Director Joshua Grannell is better known in his native San Francisco as drag performer Peaches Christ, and "Peaches" makes a cameo appearance in the film.

Nikita Ramsey
as Vera
View All

Critic Reviews for All About Evil

Audience Reviews for All About Evil

There are no featured audience reviews for All About Evil at this time.

All About Evil Quotes