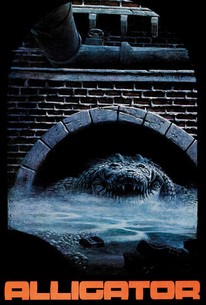 Lewis Teague directed this sly horror-comedy from a script by John Sayles, which plays off the old urban legend about the dangers of flushing one's pet alligator down the toilet. One such unlucky reptile is "Ramon," who survives in the subterranean cesspool by feeding on the steroid-saturated carcasses of dogs dumped there by chemical company researchers and eventually bulks up to the size of a Winnebago. When assorted sewage workers start disappearing into Ramon's massive maw, hard-boiled cop David Madison (Robert Forster), who has a history of unlucky partners, reveals a strong personal interest in the case. Deemed a jinx and a nutcase by his superiors, he's kicked off the force and must go underground (literally) to destroy the beast with the help of young reptile-expert Marion (Robin Riker). The witty screenplay is filled with clever references, eccentric characters and in-jokes aplenty (a style reflective of Joe Dante's Piranha and The Howling, both of which Sayles also scripted), which combines with decent effects and a good amount of suspense (particularly in the sewer scenes) to make this an entertaining romp overall. Highlights include Henry Silva's over-the-top performance as a misplaced big-game hunter who recruits urban "native guides" in his back-alley search for the elusive Ramon.