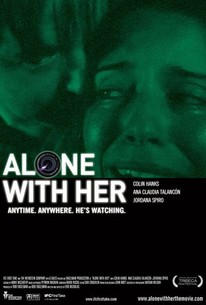 Alone With Her is a tense psychological thriller that overcomes its contrivances with fine performances and a perpetually unsettling mood.

Alone with Her Ratings & Reviews Explanation

Alone with Her Photos

A quiet but disturbed young man puts the life of a woman he's obsessed with under a virtual microscope in this independent psychological thriller. Amy (Ana Claudia Talancón) is an attractive young woman who has recently broken up with her boyfriend and is feeling a bit lonely. Amy isn't so sure she's ready to start dating again, but she keeps bumping into Doug (Colin Hanks), a geeky but friendly guy who goes out of his way to be nice to her and seems to have very similar tastes and interests. Amy establishes a friendship with Doug even through he's awkward and not really her type, but Amy's best friend, Jennifer (Jordana Spiro), senses that there's something not quite right about Doug. And Jennifer is right -- Doug is a high-tech stalker who has wired Amy's apartment with a number of inexpensive security cameras and listening devices and constantly watches her, studying her tastes, her habits and her emotions as well as looking in as she sleeps and showers. Alone With Her is shot entirely from the perspective of Doug's cameras, so we see the film's events as he sees them, and are frequently made aware that each scene represents another invasion in Amy's privacy. Alone With Her received its world premiere at the 2006 Tribeca Film Festival. ~ Mark Deming, Rovi

News & Interviews for Alone with Her

Critic Reviews for Alone with Her

Audience Reviews for Alone with Her

Alone with Her Quotes