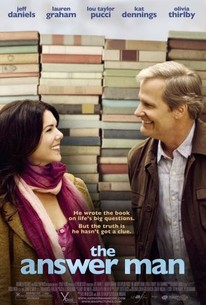 The Answer Man takes an interesting premise and overloads it with implausible scenarios, indie comedy cliches, and an all-too-familiar story arc that only occasionally benefits from its typically capable actors.

The reclusive author whose groundbreaking book redefined spirituality for an entire generation realizes how little he actually knows upon being approached by a single mother and a recovering addict in this drama from first time writer/director John Hindman. It's been 20 years since Arlen Faber (Jeff Daniels) penned "Me and God," and the inspirational, soul-searching book is still as popular as ever. Anyone who reads it thinks that Arlen has all the answers to life's problems, but these days the author barely ventures outside of the house. Then, one day, Arlen crosses paths with Elizabeth (Lauren Graham), a single mother struggling to raise her seven-year-old son, and Kris (Lou Taylor Pucci), a young man who has just gotten out of rehab. Both are searching for the answers that will help them to become better people while overcoming their fears of failure. Does Arlen possess the wisdom to help Elizabeth and Kris work through their current problems, or is he really as clueless as he's been feeling for the last two decades?