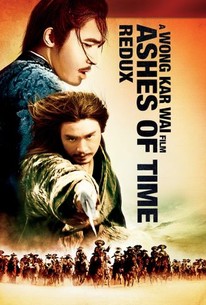 Wong Kar Wai's redux, with a few slight changes from his 1994 classic, is a feast for the eyes, if a little difficult to follow.

Master Hong Kong filmmaker Wong Kar-wai directed this lyrical, dream-like martial arts epic. A famously troubled shoot, the film took two years and 40 million dollars to produce (a shocking sum for a national cinema populated with low-budget quickies) and features a virtual who's-who of the Hong Kong film world. Conceived as a prequel to the popular martial arts novel The Eagle-Shooting Hero by Jin Yong, the movie is less a straightforward action thriller than a visually striking meditation on memory and love. It nominally centers on Ouyang Feng (Leslie Cheung), who ekes out a lonely existence as an itinerant hired sword. Getting on in years and tormented by memories of a lost love, he also works an agent for other mercenary assassins from his remote desert abode. Ouyang's old friend and fellow swordsman, Huang Yaoshi (Tony Leung Kar-fai, who starred in the The Lover) drowns his lovelorn misery in a magical wine that makes him forget. Later, a mysterious young man named Murong Yang (Brigitte Lin) hires Ouyang to kill his sister's unfaithful suitor, Huang Yaoshi. The following day, that spurned sister, Murong Yin (Lin again), hires Ouyang to protect her dearly beloved. Meanwhile, Hong Qi (pop star Jackie Cheung) finds some redemption for a life of killing by accepting a poor girl's offer to avenge her brother's death -- a task that Ouyang brusquely shunned. In another subplot, a master swordsman (Tony Leung Chiu Wai) is slowly going blind. He agrees to defend a village from horse thieves so that he can afford to go home and see his wife before his eyesight fails completely. This film is one of the most celebrated examples of 1990s Hong Kong cinema: it won multiple awards in its native Hong Kong, along with a Golden Osella for Best Cinematography at the 1994 Venice Film Festival. ~ Jonathan Crow, Rovi