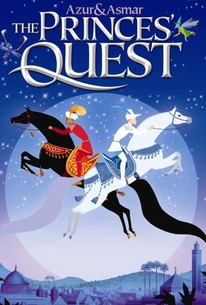 Two lifelong friends set off on a remarkable adventure in this animated feature. Azur (Rayan Mahjoub) is an orphaned boy living in 18th century France, where he's being raised by Jenane (Hiam Abbass), a nurse of Arab heritage who cares for the boy alongside her own son, Asmar (Abdelsselem Ben Amar). Jenane regales the boys with tales of the mysterious Fairy Djinn, a magical creature with great powers but equally great protectors at her disposal. Azur is sent away to school, but when he returns home as a grown man (now voiced by Cyril Mourali), he finds Jenane and Asmar have gone. Convinced the Fairy Djinn is responsible, Azur hops a ride aboard a sailing ship and sets out to find the Djinn as well as his friends. However, in time Azur meets up with Asmar (now voiced by Karim M'Ribah) only to discover he and his mother are also searching for the powerful Djinn for their own purposes. Now that his best friend has become a competitor in the race to find the Djinn, Azur recruits a team of helpers to aid him as he tries to beat Asmar in their game. Azur and Asmar received its world premiere at the 2006 Cannes Film Festival.

Leopold Benedict
as Azur as a Child

Freddie Benedict
as Asmar as a Child

Emma Tate
as The Djinn Fairy

Suzanne David
as The Elf Fairy

Keith Wickham
as The Father

Sofia Boutella
as The Elf Fairy

Jacques Pater
as The Father

There are no featured audience reviews for Azur et Asmar (Azur and Asmar: The Princes' Quest) at this time.