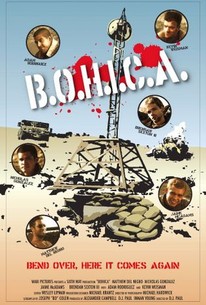 Set on a small parcel of land in American-occupied Afghanistan and taking place over the course of 24 hours, D.J. Paul's feature directorial debut, B.O.H.I.C.A. (an acronym for "bend over, here it comes again"), follows the bizarre events that unfold when four U.S. Army Reservists assigned the thankless task of protecting a radio tower realize that they have actually come under attack by an Afghani militia. Realizing that they're more likely to die of boredom than enemy gunfire in their barren surroundings, the soldiers settle into a monotonous routine until the U.S. Air Force mistakenly airdrops a keg of beer right next to their outpost. Hours later, after a beer-fueled day of banter and bonding, an Afghani militia descends from the mountains to wage a vicious attack. Perhaps with a little luck, the soldiers will be just sober enough to shoot straight, and live to tell their tale another day. Adam Rodriguez, Nicholas Gonzalez, Matthew Del Negro, Brendan Sexton III, and Kevin Weisman star in a film that exposes the absurdity and futility of war while paying playful homage to the men and women who feel compelled to fight it.

There are no featured audience reviews for Bohica at this time.