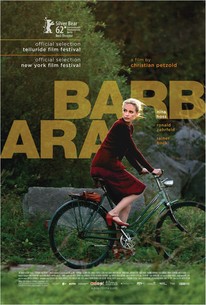 Winner of the Best Director prize at this year's Berlin Film Festival, the latest film from Christian Petzold (Yella, Jerichow) is a simmering, impeccably crafted Cold War thriller, starring the gifted Nina Hoss-in her fifth lead role for the director-as a Berlin doctor banished to a rural East German hospital as punishment for applying for an exit visa. As her lover from the West carefully plots her escape, Barbara waits patiently and avoids friendships with her colleagues-except for Andre (Ronald Zehrfeld) the hospital's head physician, who is warmly attentive to her. But even as she finds herself falling for him, Barbara still cannot be sure that Andre is not a spy. As her defensive wall slowly starts to crumble, she is eventually forced to make a profound decision about her future. A film of glancing moments and dangerous secrets, BARBARA paints a haunting picture of a woman being slowly crushed between the irreconcilable needs of desire and survival. Germany's official Oscar submission for Best Foreign Language Film.

Thomas Neumann
as Pensioner at the Car

Anette Daugardt
as Colleague of Schütz

Jean Parschel
as Colleague of Schütz