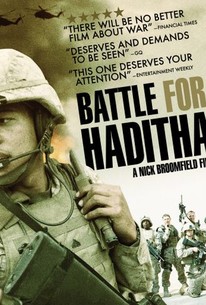 This narrative retelling of the real life tragedy in Haditha is gripping and immediate but may sacrifice the subtleties of history for dramatic impact.

The fate of two cultures becomes locked on a tragic collision course in director Nick Broomfield's dramatization of the events that led to the massacre of 24 Iraqi men, women, and children by American Marines. A squadron of American soldiers goes speeding across the Iraqi desert in a convoy of armored Humvees, eventually stopping at a local store where the soldiers jump out to stretch and browse the DVD selection. Meanwhile, as the Marines strike up a conversation with the young male clerk behind the counter, two Iraqi men climb into the back of a pick-up truck to get a crash course in IED mechanics. Both the Marines and the Iraqis are simply going about their daily business as usual, just doing their best to survive in a land where war is just another fact of life. For the Marines it's all about patrolling the desert and waiting for the next bomb to go off. When a roadside IED kills one Marine and wounds two others, the vengeance with which the American soldiers strike back at the locals may cause even the most hard-line warhawks to take pause and consider the true cost of a war which has no end in sight.

Duraid A. Ghaieb
as Rashied

Hamzeh Zedan
as Person at Party

Aseel Zedan
as Person at Party

Laith Zedan
as Person at Party

Hanan Sami
as Person at Party/Extra

Sezar A. Mahammed
as Extra

Dhia'a Khalil
as Extra
View All

Critic Reviews for Battle for Haditha

Audience Reviews for Battle for Haditha