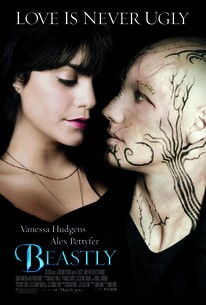 Beastly is an edgy teen romance about learning how to see past false surfaces to discover true inner beauty. Kyle Kingson (Alex Pettyfer) has it all - looks, intelligence, wealth and opportunity - and a wicked cruel streak. Prone to mocking and humiliating "aggressively unattractive" classmates, he zeroes in on Goth classmate Kendra (Mary-Kate Olsen), inviting her to the school's extravagant environmental bash. Kendra accepts, and, true to form, Kyle blows her off in a particularly savage fashion. She retaliates by casting a spell that physically transforms him into everything he despises. Enraged by his horrible and unrecognizable appearance he confronts Kendra and learns that the only solution to the curse is to find someone that will love him as he is - a task he considers impossible. Repulsed by his appearance, Kyle's callous father (Peter Krause) banishes him to Brooklyn with a sympathetic housekeeper (LisaGay Hamilton) and blind tutor (Neil Patrick Harris). As Kyle ponders how to overcome the curse and get his old life back, he chances upon a drug addict in the act of killing a threatening dealer. Seizing the opportunity, Kyle promises the addict freedom and safety for his daughter Lindy (Vanessa Hudgens) if she will consent to live in Kyle's Brooklyn home. Thus begins Kyle's journey to discover true love in this hyper-modern retelling of the classic "Beauty and the Beast" story. Vanessa Hudgens (High School Musical) and Alex Pettyfer (Wild Child, Stormbreaker) star in Beastly for CBS Films, the film division within CBS Corporation (NYSE: CBS.A and CBS). Daniel Barnz (Phoebe In Wonderland) directed the project which completed principal photography in Montreal in August 2009. The film will be released in theaters in July 2010. Susan Cartsonis (No Reservations, What Women Want) is producing through her company, Storefront Pictures. Roz Weisberg is co-producing. In addition to his role as director, Barnz wrote the screenplay, which is based on the Alex Flinn novel of the same name. -- (C) Disney

Neil Patrick Harris
as Will