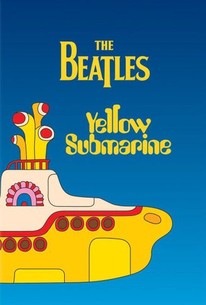 A joyful, phantasmagoric blend of colorful animation and the music of the Beatles, Yellow Submarine is delightful (and occasionally melancholy) family fare.

Yellow Submarine is an animated meandering journey filled with puns and dry British humor, where psychedelic music videos take precedent over any linear story. What little there is of a plot, however, concerns a vibrantly colored place called Pepperland that resembles the album cover for Sgt. Peppers Lonely Hearts Club Band come to life. The swirling animation is a mixture of pop-culture images and modern artistic styles brought loosely together with a naïve antiwar message and some clever political commentary. The Blue Meanies take over Pepperland, draining it of all its color and music, firing anti-music missiles, bonking people with green apples, and turning the inhabitants to stone by way of the pointed finger of a giant white glove. As the only survivor, the Lord Admiral escapes in the yellow submarine and goes to London to enlist the help of the Beatles (voiced by actors). The charming and innocent boys travel through strange worlds and meet bizarre characters, including the tagalong Nowhere Man. Several blissed-filled musical sequences and drug references later, the Beatles drive out the Blue Meanies and restore Pepperland to tranquility armed with only music, love, and witty remarks. ~ Andrea LeVasseur, Rovi

The Beatles
View All

Total Recall: Across the Universe And The Beatles On Film
Rolling Stones Get Animated With "Ruby Tuesday"
ThinkFilm Gets "Down" with New Norton/Wood Indie
View All