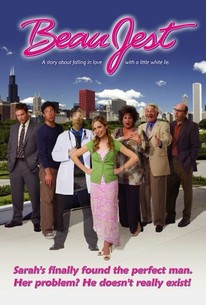 Beau Jest is the hilarious, heartwarming story about Sarah Goldman, a beautiful young school teacher from Chicago who is involved with Chris, a great guy with just one apparent flaw, he's not Jewish. Sarah tells her parents that she is no longer seeing Chris, but continues to date him in secret.

To keep her mother from trying to fix her up with "nice Jewish boys," Sarah invents the perfect boyfriend and regales her parents with stories of the man of her mother's dreams. Eventually they insist on meeting the man, and in desperation, Sarah hires Bob, an actor, to play the part of her new beau. Unaware of the scope of the role he has taken on, Bob accompanies Sarah to dinner with her parents and her brother Joel. He quickly realizes that what he has gotten himself into is much more than he bargained for. It will take all of his charm, wit and improvisational skills to pull off the charade. But Bob rises to the occasion, and the antics that follow is only the beginning of a side-splitting tale that will have you rolling in the aisles, and wiping tears from your eyes at the same time.

Tom Drury
as Rabbi
View All

There are no featured audience reviews for Beau Jest at this time.